This Agency Agreement is suitable for a company that wishes to act as agent for a manufacturer or supplier on an exclusive basis in a defined territory.

This agency agreement is for international use and it is generally compatible with EU legislation. 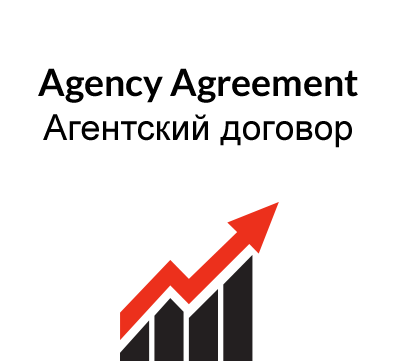 This Agency Agreement is offered as a dual-language document in English and Russian. Данный двуязычный Агентский договор предлагается на английском и русском языках. It is suitable for a principal who manufactures goods and wishes to…

This Agency Agreement contemplates that a manufacturer or supplier of goods in one country will appoint an agent in another on an exclusive basis for the sale of those goods. The Agreement is fairly evenly balanced, but biased in favour of the Agent. Whereas a distributor buys for re-sale, purchasing from the Principal, the role of an agent is to find buyers on behalf of the Principal and on the Principal’s terms and conditions of business.

When the Agreement is being used in a cross-border situation, with the Agent and Principal in different countries, the Agent should have the text checked by a lawyer in the Principal’s jurisdiction even if the Agent wishes to use the law of his own country, i.e. the Territory, as the governing law of the Agreement.

Specific comments on our model form, by reference to clauses, are set out below:

DATE AND PARTIES: – see our separate note https://www.contractstore.comsigning_contracts. In the case of the parties, the official address of each of the parties should be inserted and where a party operates under a P.O. Box Number, a physical address might also usefully be included.

This contains a number of defined terms that need to be considered by the parties in the light of their own particular arrangements. Where reference is made to a defined term in the text of the Agreement, it is denoted by capital letters.

Products are to be listed in a Schedule. Especially when the relationship between the parties is a new one, the Principal may not want to list all his Products but only those which he considers are likely to sell most effectively in the Agent’s Territory. It is sometimes possible for a Principal to appoint different agents for different products in the same territory. The Agent should be aware of this and may endeavour to persuade the Principal that all Products of the Principal are covered by the Agreement.

If the Principal is new to the region where the Agent operates, the Agent may wish to propose that the Territory shall cover not only the Agent’s own country but also neighbouring ones.

The Territory covered by the Agreement is defined by reference to a Schedule. The Territory may cover a complete country, part of a country or more than one country, but whichever the case, it is important to define it clearly. Do not, for example, refer to “any country in the Middle East”, since there may be an argument as to whether certain countries are included in the Middle East.

This confirms the appointment of the Agent on an exclusive basis – i.e. the Principal by appointing this Agent will not be able to appoint another Agent for the same products in the Territory.

In clause 2.2 the Agreement contemplates a fixed Initial Period of [2] years and after that the Agreement will roll over unless terminated.

The basic principle of this clause from the Agent’s perspective is that he should be entitled to commission on all sales of the Products to customers in the Territory including Products sold elsewhere but destined for delivery to the Territory. This may be very different from the Principal’s perspective under which, for example, certain sales are sensitive and the customer wants to deal only with the Principal. In such a case the parties need to reach agreement on what, if any, commission will be payable.

This contains a number of self-explanatory provisions requiring the Agent to promote the sale of the Products, undertake an advertising campaign etc. As this document is drafted from the Agent’s point of view, it is shorter than the Principal might wish for. (See document A101 for a clause favouring the Principal).

Since the Agent is negotiating sales on the Principal’s behalf he is required in this clause to apply the Principal’s list prices and not to offer any discount or impose any surcharge outside agreed limits.

Commission is dealt with by reference to Schedule 3.

Clause 5.7 deals with statements to be sent to the Principal against which the Principal will make Commission payments. Under this wording, the Principal is required to pay relatively quickly from the date of receipt of a statement, which is acceptable to him. Longer payment periods would require adjustment of the wording. Interest is payable to the Agent in the event of late payment. However the Agent should note that although it is useful to include this provision in such an agreement it will often be commercially imprudent to insist upon payment of interest where there is a continuing commercial relationship. It should be noted that interest is not payable where it is agreed that an amount disputed was in fact not due to the Agent.

For the Agency to operate successfully, the Principal needs to provide regular support, including advertising material, technical data etc. as well as ensuring the price lists are kept up to date.

In appropriate cases where training is necessary for the Agent’s staff, 6.1.4 provides for the Principal to provide free training, and this may include the employees’ travel and accommodation costs. Sometimes the Agent will bear such costs or they might be shared on an agreed basis.

The clause also obliges the Principal to confirm orders and make deliveries in accordance with those confirmations as well as maintaining product liability insurance and indemnifying the Agent against any Product defects.

Under our clause, either party can terminate in the event of the other’s material (i.e. not trivial or insignificant) breach of contract or insolvency. Termination by the Principal may not be as easy in practice as this clause suggests and legal advice is recommended before attempting to terminate.

Clause 8.3 deals with the consequences of termination and, as will be seen, outstanding sales will be honoured and the Agent will receive commission that has already been earned.

Clause 8.4 contains provision for the Principal to pay compensation to the Agent unless termination is due to the material breach of contract or insolvency of the Agent. This is intended to avoid disputes as to what the level of compensation should be but, once again, advice on this clause before the Agreement is signed is important.

Under EU legislation there is provision for the Principal to pay either compensatory damages or an indemnity to the Agent unless termination is due to a material default or insolvency of the Agent. It should be noted that this right to compensation/indemnity will also arise where the Agent terminates by reason of ill health/old age or by reason of the Principal’s conduct.

For more details on the difference between compensation and indemnity as well as other aspects of EU law, see our free document Z163 – on Commercial Agents. Also, note that under EU law, if the Agreement is within the EU, claims for compensation or indemnity must be made within 12 months of termination.

This is intended to restrict the Principal from competing with the Agent’s business after the Agreement has been terminated by appointing another agent in the Territory, unless the Agent’s material breach of contract or insolvency was the reason for termination. (This is the opposite of Document A101 where the restriction is imposed on the Agent.)

10.1 restricts either party from assigning the agreement without the other’s written consent. Clause 10.2 gives the Agent the right to appoint sub-Agents. Clause 10.3 deals with formal notices. In clause 10.6 we have suggested direct negotiation followed by mediation (if agreed) and, ultimately, arbitration in the event of disputes.

For other standard clauses and for a more detailed discussion of dispute resolution, see the Free Document (Z140) on our website which can be downloaded free of charge.

Finally, a reminder that you should get appropriate legal advice before using this Agreement.

For general guidance on preparing and signing contracts please see our notes at https://www.contractstore.comsigning_contracts

£49.00 plus VAT
If you have a unique discount code for this product, please enter it as you go through the buying process.
Contracts are available for download from the order confirmation email and in ‘My Account’ after payment.