Arbitration is a method of settling disputes between parties to a contract without having recourse to the courts. The clause in the contract which provides for arbitration is usually referred to by lawyers as “the Arbitration Agreement”.

If there is no arbitration clause then, unless the parties otherwise agree, in the event of a dispute, either of them may start proceedings in the courts.

• Privacy – Arbitration is a private method of settling disputes. Unlike proceedings in Court, the general public are not admitted to hearings; none of the documents will become public, and there will not access for journalists to report on the proceedings or the outcome. Companies which are involved in high-tech and other sensitive contracts frequently require arbitration clauses so as to avoid confidential data becoming the subject of public debate in the Court and/or matters of public record.

• Flexibility of Procedure – There is scope for having the arbitration procedure tailored to the requirements of the parties.

For example, if a dispute can be resolved by having the arbitrator read documents presented to him by the parties, without any need for a hearing or examination of witnesses, then, by agreement, this is the way in which the arbitration will be run. Court processes tend to be procedurally complex and slow, with a lot of time elapsing before a case comes to trial. With arbitration, at least in theory, the case can be dealt with quite quickly and at the pace of the parties (and the arbitrator) rather than at the pace of the public judicial system which is frequently overworked.

• Choice of Arbitrators – The parties can themselves decide who is best qualified to hear the dispute. A case which goes to the Courts will be heard by a Judge -who will invariably be a lawyer. An arbitration dispute may, on the other hand, be heard by an engineer or some other person with specialist knowledge.

The arbitration clause in the contract ought to provide how the arbitrator is to be selected. If there is to be one arbitrator, then if the parties cannot agree, the clause should provide for some independent party – for example the International Chamber of Commerce – to nominate the arbitrator. If a specialist is required, then the appointing authority should be a relevant one -for example, the Institution of Civil Engineers if an engineer is to be arbitrator.

If there are to be three arbitrators, each party will usually appoint his own arbitrator and these two will select the third arbitrator to act as chair of the Tribunal.

• Limited Authority of Arbitrators. Since arbitration is a private arrangement between the parties, the arbitrators do not have the same powers as a Judge to order a party to provide documents or to compel a witness to appear. However an arbitrator can rule against a particular party and a party may also have the right to apply to the courts for orders of a procedural nature.

• Recognition and Enforcement of Arbitration Awards. The award of an arbitrator does not have the same legal effect as a judgement in the courts. As the arbitration process is a consensual one, if one party refuses to honour the arbitrator’s award, it will be necessary for the other party to go to court to enforce that award. There is then a risk, at least in some jurisdictions, that the court will, in effect, want to hear the dispute all over again before deciding whether to enforce the arbitration award.

It is understood that statistically something like 90% of international arbitration awards are in fact honoured -so enforcement proceedings are not necessary in the vast majority of cases.

However, if the overall procedure is quicker than it would be if you went to Court, – e.g. if there are no hearings, and the arbitrator makes his award on the basis of documents submitted to him – you could well end up having to pay far less than if the case went through the courts.

One other point on costs: The costs which are common to the arbitration – primarily the fees of the sole arbitrator (or chairman of the tribunal if there are three arbitrators) and the costs of any institution involved – e.g. the ICC – will have to be paid by the parties in equal shares and, usually up-front – in advance. The arbitration award may, but will not always, specify whether the legal costs and expenses of the successful party should be borne by the losing party. In the case of court proceedings, in England, the losing party is usually ordered to pay the other side’s legal costs.

There are many organisations, national and international, which offer arbitration services. Perhaps the most well known is The International Chamber of Commerce which has its head office in Paris. Others include:

• The American Arbitration Association – suitable if there is a US element.

• The London Court of International Arbitration – useful if London or English law is relevant.

• International Centre for the Settlement of Investment Disputes (Based in Washington D.C. and primarily for international disputes of a substantial size, often with a government party).

Each of these organisations has a panel of international arbitrators and a set of rules governing arbitration processes. Each of them charges fees for administering the arbitration which have to be paid in advance.

In many countries there will be legislation which deals with arbitration, making it enforceable and the legislation may cover a number of procedural issues that can arise in an arbitration.

The arbitration clause may stipulate not only what rules apply to the arbitration and how many arbitrators there may be, but also where the arbitration will take place. At least one of the parties – and probably both of them – will want the arbitration to be held in a neutral territory – i.e. a country which is not connected with a party to the agreement.

In selecting a neutral forum, it is advisable to check that the local legal environment is an acceptable one. For one thing, the local law should, ideally, be one which recognises – and is a signatory to – the New York Convention – i.e. one which will recognise the effectiveness of international arbitration. (It is worth mentioning here that under the New York Convention, a treaty state is only bound to enforce an award “made in the territory of another contracting State”.)

There are also practical considerations: the convenience of the territory for the parties, their lawyers, witnesses, etc.

When an international contract is prepared in more than one language, it is sensible to have a clause that stipulates which is the ruling language of the contract. It is also sensible to stipulate in the arbitration clause what will be the language in which any arbitration proceedings will be conducted. These will not necessarily be the same.

“Any dispute or difference between the parties arising out of or in connection with this Agreement shall be finally settled by arbitration in accordance with the UNCITRAL Arbitration Rules at present in force.

These shall be a single arbitrator agreed between the parties or, in default of agreement; the appointing authority shall be [the International Chamber of Commerce].

“All disputes arising in connection with this Agreement shall be finally settled under the Rules of (Conciliation and] Arbitration of the International Chamber of Commerce by three arbitrators appointed in accordance with the Rules. 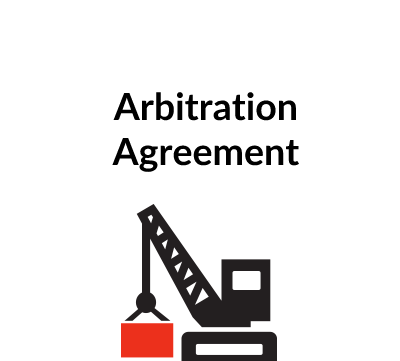 Who can use this contract? You can use this  Agreement if you are  an employer, main contractor or subcontractor and you want to refer disputes arising out of a project to the same arbitrator as… 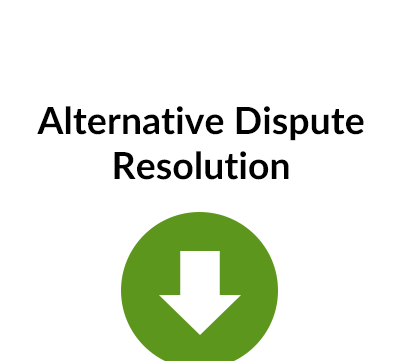 Alternative Dispute Resolution or ADR is the phrase widely used nowadays to describe a method of resolving disputes without going to court. This free document gives you background information about ADR and arbitration. 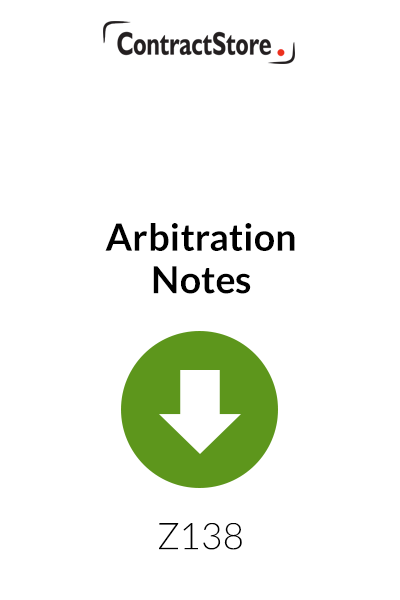